Summary of the European Mixed Couples Cup in Maladinov

October 10, 2020 at 2:08 pm
In Liptov, Slovakia, we have organized an event at the birthplace of SASIM President Vladimír Bátik in Ploštín in recent years. This year, however, the location of the race has changed. The strong men and strong women met in a newcomer complex - Maladinov. This was thanks to the efforts of Vladek Bátik or Milan Gabrhel, who accompanied the audience throughout the whole event.
It was this accommodation resort on the bank of the Liptovská Mara that provided the perfect background for the organizing team as well as for mixed couples, consisting of a strong man and a strong woman. However, due to COVID-19 measures, not all teams could participate in the European Championship from the original nomination.
The defending champions Janka Vašková and František Piros started. The Slovak association of strong men also nominated Márius Babkovič and Natália Kopčanová. Their strongest woman Veronika Rulíková and the strongest Czech fighter from the Czech Republic, Jirko Dejmal, are currently visiting the neighboring Czech Republic. They were supplemented by the legend Jiří Žaloudek and Miška Zemánková. Ivan Hryhorovskyy and Erika Kašper Rehák replaced Ukraine, but were injured already during the warm-up. The last one who introduced himself in Maladinov was Konstantin Ilin. His partner did not arrive either, nor did the whole team from Hungary. The continuing "pandemic" and the (sometimes absurd) measures associated with it have impoverished the European Championship ...
Five challenging strength tests awaited the couples. Gradually the axle was lifted, beer barrels were carried and lifted, cross-lifting was done with a car or an axle, a 150-pound sword or a 100-pound budzogan was carried, a 200-pound tire was knocked over and balls weighing 150 and 70 kilograms were thrown.
The Slovak couple Piros - Vašková did not find a conqueror in any of the disciplines supervised by Pavol Guga. For the third time they were happy about the continental title. They showed a sovereign performance and confirmed their dominance among both strong and powerful men.
Jirko Dejmal and Veronika Rulíková won the Liptov silver after a hard fight. Despite the back fatigue that accompanied Dejmal throughout the race, the pair managed to take second place thanks to the perfect performance of young Rulíková. It has a great potential and promises for the future.
The bronze hung around Babkovič and Kopčanovás neck. Without hesitation at the last throw of concrete balls they could be the runners-up in Europe. But the bronze medal is also a great success for this young couple.
Unpopular potato medals were won by the still running, legendary Jirko Žaloudek and Miška Zemánková. Ivan Hryhorovskyy and Erika Kašper Rehák took fifth place despite the injury of a colleague. Konstantin Ilyin, who rode alone, came sixth.
When the prizes were handed over to the team, the last prize was left. The owner of the resort, Pavol Tkáč, decided to give it to the strongest man among the competitors, as the performances could be decided separately and independently. František Piros thus became the strongest man of MALADINOV and was the first to win this title, which we hope has a long tradition.
Results: 1.František Piros - Janka Vašková 30b (SR), 2.Jiří Dejmal - Veronika Rulíková 23b (CZ), 3.Márius Babkovič-Natália Kopčanová 22b (SR), 4.Jiří Žaloudek - Michaela Zemánková (15) 5. Ivan Hryhorovskyy - Erika Kasper Rehak 8b (UA)
Finally, on behalf of the Association of Strong Men, all participants and organizers, we would like to thank everyone in MALADINOVA who contributed to and supported the event, which met the standards of world events! We strongly believe that next year strong men will perform in this beautiful resort again! 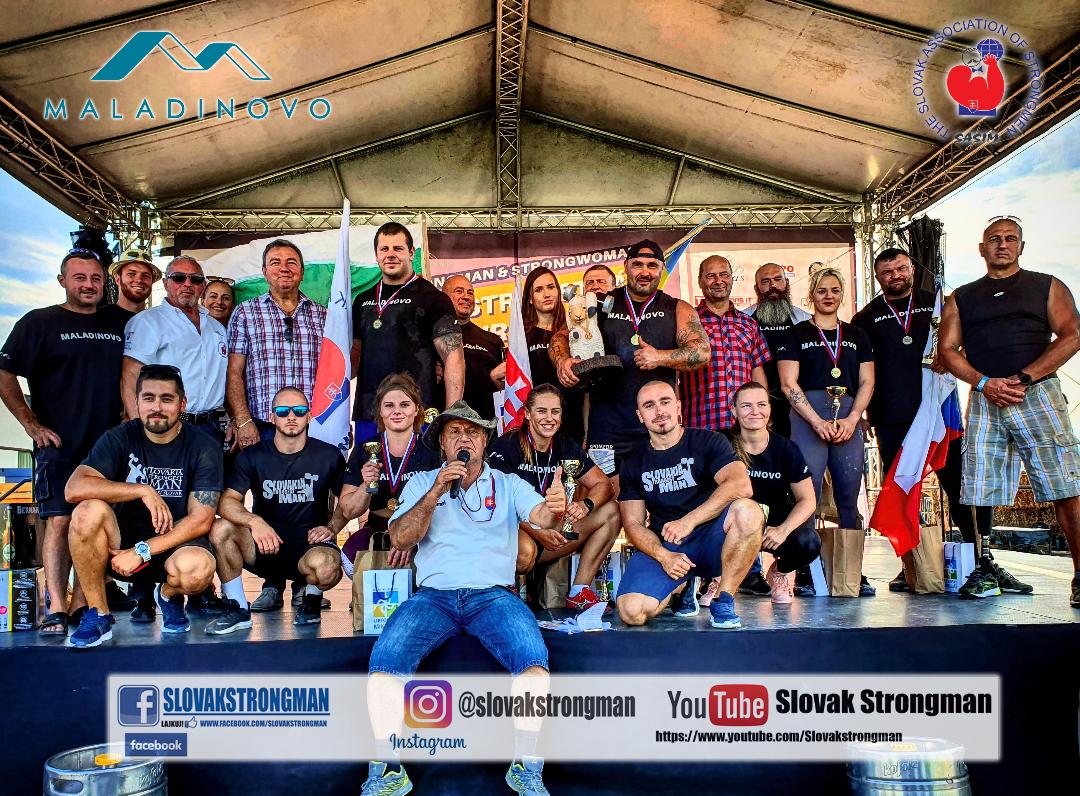 No extra info at the moment.